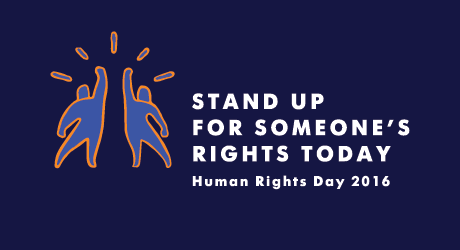 As Zeid Ra’ad Al Hussein, UN High Commissioner for Human Rights, says: “This is not yet another campaign. It is an imperative. With global values under attack, we want to call on people to draw the line; to use their rights to defend rights.”

The “Stand Up” campaign is a call to people across the world to stand up for human rights everywhere – in the workplace, on the sports field, at school, in the street.

We Are Standing Up For The Rights of Climate Displaced People

The impacts of climate change already effect the enjoyment of peoples’ human rights and these can be further undermined if climate action is not informed by human rights norms. Left unchecked, climate change has also the potential to wipe out the development gains of recent decades.

It is therefore imperative for any climate action to protect and respect human rights. This can be achieved with a climate justice approach, which is the basis of the Foundation’s work on human rights and climate change, in line with the Principles of Climate Justice ‘Protect and Respect Human Rights’ and ‘Support the Right to Development‘.

All migrants are covered by human rights, but people displaced by climate change may need differing rights protections from other migrants. The impacts of climate change can lead to displacement that does not fit within current international law or norms. At present, the rights of climate displaced people are not always protected. The Foundation seeks to ensure the protection of climate displaced people is assured starting with a prioritisation of this issue by international bodies.

People are already displaced due to the impacts of climate change. People such as those of the Carteret Islands.

Ursula Rakova was born on the Carteret Islands 86km north-east of Bougainville in Papua New Guinea. Sea level rise has forced the people of the Carteret Islands to begin the process of leaving their land to relocate onto Bougainville Island. Erosion and salt water intrusion have made it impossible to sustain their food gardens and as a result the rights to food, water and health of the islanders have been affected. The act of leaving their island atolls is also affecting the cultural rights of the Carteret Islanders, including Ursula, as they must leave the land of the ‘bones of their ancestors’ and negotiate a new life as outsiders near Bougainville. Ursula is now the Executive Director of Tuele Peisa an organisation seeking to facilitate an ecologically and culturally sustainable relocation and resettlement of the Tulun/Carteret Atoll community.

Selina Leem is a young woman from the Marshall Islands and was the youngest delegate at the COP21 in Paris. During the closing remarks, then Marshall Islands Foreign Minister Tony deBrum gave her the opportunity to give the final statement on behalf of her country. She told the world that Paris agreement, “should be the turning point in our story; a turning point for all of us.” Selina Leem is a climate activist who explains why she, and her community are at risk of becoming climate refugees.

The Global Compact for Safe, Orderly and Regular Migration was mandated out of the New York Declaration for Refugees and Migrants. “The basic rights of those displaced by climate change must be recognised and protected,” said Mary Robinson at a recent meeting of the IOM Council. “This will be a central test of the Global Compact, and whether it is a compact for the future or one trapped in the news cycles of today.”

The Compact must recognise that “climate displacement is an issue of justice, and that migrants moving as a result of the impacts of climate change, or of related issues exacerbated by climate, will – in large part – represent the most vulnerable in society, and the least responsible for the causes of climate change,” Mary Robinson said.

The most fundamental action that countries can take to protect the rights of people at risk of climate displacement is to limit the impact of climate change as much as possible and thereby reduce the threat to populations in high risk areas. This is the responsibility of all countries, and was affirmed in the Paris Agreement’s commitment to keeping temperatures at well below 2°C above preindustrial levels and pursuing efforts to limit the temperature increase to 1.5°C above preindustrial levels.

The Universal Declaration of Human Rights states the ‘recognition of the inherent dignity and of the equal and inalienable rights of all members of the human family is the foundation of freedom, justice and peace in the world’. In terms of climate change, the full weight of history is on our shoulders and the gaze of the future is on our actions – we must stand up for the rights of all people, especially those people who are in the most vulnerable situations such as Ursula and Selina.

Our Work on Human Rights and Climate Change

Stand Up for Someone’s Rights Campaign