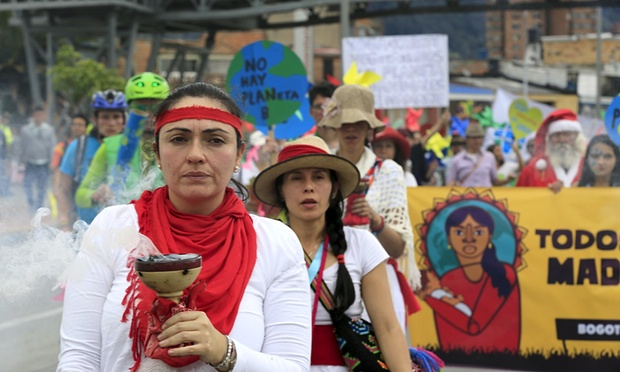 As the nations of the world meet in Paris to address climate change, it is critical that women play a central role in these historic negotiations. Gender equality is central to effective climate action. The world cannot afford to neglect the needs of half the world’s population, nor ignore their talents and potential in innovating solutions.

Structural and cultural disparities make women disproportionately vulnerable to the impacts of climate change. Women are more likely than men to die during and in the aftermath of natural disasters and climate change-related events. For the women who survive, many often lack legal assets and rights to property, which leaves them few resources with which to rebuild their lives. As women travel greater distances to collect essential resources like water, firewood and food to support their families, they are often threatened and abused.

Climate change has also contributed to high levels of displacement and forced migration due to environmental degradation and natural disasters. While migration can be a lifesaving tool for adaptation to climate change, forced migration often perpetuates and worsens the inequalities that women face. When male family members migrate, female members are often left to perform traditional roles as caregivers, in addition to becoming the sole breadwinner. When women must migrate, their economic and physical security is compromised, often leaving them to become targets for human traffickers and smugglers.

The report also demonstrates – through a plethora of examples from around the world – that women are critical agents of change. Despite their vulnerabilities, women contribute to both adaptation and mitigation efforts in many parts of the world through creative, localized solutions. Numerous mediating institutions are working to provide women with opportunities to create their own sustainable businesses that also serve to reduce the global threat of climate change.

Consider Grameen Shakti, a renewable energy social enterprise that trains women as solar technicians. To date, more than 1,000 women have been fully trained in this program, and thousands more have played related roles in solar construction and installation. They have installed nearly 800,000 solar home units in Bangladesh, a country that is particularly vulnerable to the worst consequences of climate change.

Model programs, such as this, transform women’s lives by providing them access to sustainable livelihoods, while improving the lives of their customers and the broader community.

Women are also working to combat the negative effects of deforestation. Women farmers in Iztapa, Guatemala have partnered with the International Reforestation Alliance (AIRES) to plant and farm trees, preventing soil erosion and promoting carbon sequestration. The women have planted more than 150,000 trees, contributing to the reforestation of the region’s mountain slopes, and have built more than 800 energy-efficient brick stoves, which use half the amount of firewood as traditional fires. Women’s access to training, technology and financial resources is essential to enhance their vital role in contributing to solutions.

Perhaps more than any other global challenge, climate change reminds us both of our interdependence as well as the need for collaboration and meaningful participation. At the Paris climate talks and beyond, women must be included as leaders in decision-making positions within national delegations as well as representatives of multilateral agencies focused on climate change.

It is critical to ensure more open and consistent channels of communication between official negotiations addressing climate change and women leaders of civil society organizations who can relay the ground-truths. Women’s participation is not an option, but a strategic necessity. The language of the new agreement must recognize the gendered impacts of climate change, and also offer measures to strengthen women’s leadership through references in both perambulatory and operative clauses.

Delegates at the Paris conference should strive to build on the progress made in Doha at COP18, where significant progress towards gender equality was made. As world leaders decide how to commit resources to address climate change and its impacts, all financing arrangements should be gender-responsive. All too often, women are shortchanged in their vital efforts.

Women have a right to meaningfully participate in efforts to address the broad spectrum of challenges posed by climate change; not only is it the right thing to do, it is the smart thing to do for people and for the planet. Our health, livelihoods and the safeguarding of human rights – as well as our collective future – depend on nothing less.

This article was first published in the Guardian on 1st December 2015.

Melanne Verveer is the Executive Director of the Georgetown Institute for Women, Peace and Security at Georgetown University.

Find out more about the Foundations Work on Women’s Leadership on Gender and Climate Change.