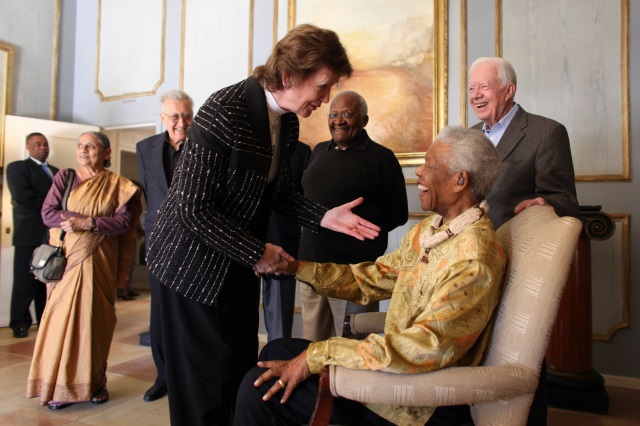 Nelson Mandela and Mary Robinson at their meeting in Johannesburg in May 2010 | Photo: Benny Gool / The Elders

Mary Robinson on the Madiba she knew and admired.

Nelson Mandela, Madiba,  prisoner 466/64 – whatever name we use we are talking about a much loved citizen of the world whose memory and legacy will never die.

What is it that made Nelson Mandela the most revered statesman and beloved figure of our time?  Why is it that his death is felt by all of us as a personal loss, leaving a sense of being bereft?  I can only give my own sense of why he was the most inspiring individual I have ever met.

I cannot remember when I first became aware of Nelson Mandela, but I was certainly aware of the Sharpeville Massacre of 1960 and his leadership in the immediate aftermath. And then the Irish Anti-Apartheid Movement was established in 1964 and continued to work until 1994.  It was co-founded by Kader Asmal, who later became a South African MP and Government Minister. The focus started with sport, cultural, economic and academic boycotts and grew into an organisation that was active in all areas of anti-apartheid and solidarity. Probably due in part to our missionary past, and our innate sense of justice, Irish people showed a significant commitment to the cause and Nelson Mandela, by then a prisoner on Robben Island, captured our imagination.

Thirty years later, in May 1994, I had the privilege of representing Ireland at Mandela’s Inauguration as President of the Republic of South Africa.  It was a truly memorable occasion to see how a strife torn country reinvented itself under his leadership as the Rainbow Nation.  His moral authority was evident, not least in his forgiveness of his former guards and his valuing diversity in all aspects of the new South Africa.  Perhaps the most powerful image – in a day of historic moments – was when the newly inaugurated President inspected a guard of honor drawn from the armed forces. The former prisoner of some 27 years was shown the full respect he deserved, while his predecessor former President FW de Klerk looked on also showing immense respect. A remarkable moment.

Two years later, I made an official state visit to South Africa and witnessed the enormous affection in which the people held their President, their Madiba – especially the young people. His sheer sense of fun was infectious and he could never resist moving to music; he laughed a lot and danced a lot, even when sitting down.

While serving as UN High Commissioner for Human Rights, I could think of no one better to launch the global marking of the 50th Anniversary of the Universal Declaration of Human Rights on 10th December 1997.  As I stood beside him at a ceremony in Cape Town, at which he also launched the South African Plan of Action for Human Rights, he turned to me and said “You know, Mary, there was a time when some people called me a terrorist”!

A few years later, when his term had ended, he invited me to join the GAVI Fund Board (the Global Alliance for Vaccines and Immunization) which he chaired.  It gave me a further insight into his intense commitment to children and young people, a commitment now carried forward by the work of the foundations that bear his name.

It was an honor, and also very humbling, to be invited by Mandela to join a small group of Elders, under the chairmanship of Archbishop Desmond Tutu, to support peace building and human rights, help address major causes of human suffering and promote the shared interests of humanity.  He said at our launch: “This group can speak freely and boldly, working both publicly and behind the scenes. Together they will support courage where there is fear, foster agreement where there is conflict and inspire hope where there is despair”.

From our launch in 2007 on his birthday, the Elders had several meetings with Mandela until he became too frail. That familiar voice was as strong as ever when he wanted to emphasize an issue of injustice, or remind us to listen to those on the margins, to young people and those who suffered.

The Nelson Mandela Foundation in 2009 established Mandela Day – selecting his birthday July 18th as a day to be about service to others, on an annual basis.  So each of us is asked to give 67 minutes to recognize our individual ability to make an imprint and change the world around us; it may be something as simple as supporting our chosen charity or serving our local community. The 67 minutes represents the 67 years of his life Mandela spent fighting for the rights of humanity. In a few short years Mandela Day has become a global social movement. As we mourn the passing of this extraordinary man, and young people around the world feel a particular sense of loss, we can honour him best by giving of ourselves to others.

May he rest in peace, and may his sprit continue to inspire millions throughout the world.

Mary Robinson is a member of The Elders, an organisation founded by Nelson Mandela which works for peace and human rights. In a statement, members of The Elders honour Mr Mandela’s memory.