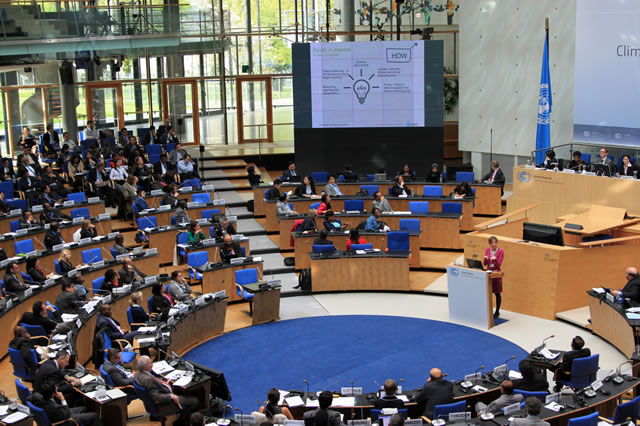 Dr Tara Shine, Head of Research and Development, reports a positive atmosphere at the Bonn Climate Change Conference, held from 29 April-3 May 2013 in Bonn, Germany, and hosted by the United Nations Framework Convention on Climate Change (

Blog by Tara Shine, Head of Research and Development

Climate meetings usually leave me feeling deflated and frustrated by long hours, small stuffy rooms and immovable negotiating positions. But not this time. This time things were different and this was a pleasant surprise. The meeting took place in Bonn’s old German parliament building on the banks of the Rhine. The negotiators (human beings after all) benefited from the daylight flooding into the main negotiating room, the fact that total numbers participating were relatively small and that the work focused on only one negotiating stream.

The meeting was the second of the Ad Hoc Durban Platform, which has the mandate of designing a new climate agreement in 2015. With all minds focused on a new agreement and a format which mixed workshops and round tables, countries managed to set their positions aside from time to time to share ideas and discuss what a new agreement might look like and what it would contain.

The workshop on Monday afternoon on the ‘scope, structure and design’ of a new agreement put the issue of equity on the table. Equity is central to the Foundation’s work on climate justice and, together with the World Resources Institute, we are working on the Climate Justice Dialogue to develop narratives and creative ideas to mobilise action towards an equitable and ambitious climate agreement. Only last year Parties to the UNFCCC were wary of discussing equity and saw it as an obstacle to ambitious action. It looked as if equity would merely be about sharing failure.

Discussions on the principle of common but differentiated responsibility and respective capabilities – bringing all countries into a common legally binding platform while assigning to them highly differentiated commitments – were generally defensive and unproductive. In this session the Parties started to look at equity as a more positive tool in helping to assess how countries contribute their actions to solving the global problem.

Themes explored included how to use the principle of equity to get countries to contribute their maximum effort. The presentation I made at the workshop suggested that this might include actions to address adaptation, mitigation and support so that the actions of and investment by vulnerable, low emitting countries on adaptation could be recognised as contributing to global action on climate change.

Also discussed were ways to frame goals for climate action that could reflect the links between reducing emissions and adapting to the impacts of climate change. Critical to the relationship between mitigation and adapation is the positive feedback from a rapid transition to low carbon development. The more rapid the transition, the lower the costs of climate impacts, the more feasible it is to adapt to changes in the climate and the less likely it is that loss and damage (compensation for irreversible climate impacts such as the loss of island nations) will be necessary.

Ideas launched at the workshop on ways of assessing the fairness of pledges made by countries to combat climate change were further explored in the corridors and in a dinner for negotiators hosted by WRI and the Foundation as part of the Climate Justice Dialogue on Wednesday evening. The idea that a process could be established whereby commitments made by countries are informed and assessed by a series of indicators or criteria consistent with the principles of the Convention attracted some attention. This flags a possible approach whereby countries can assess each other’s pledges to ensure that they are fair and add up to enough to meet the 2 degree temperature goal.

Leaving Bonn I hope that more of these smaller meetings, that are more conducive to real dialogue than the trade-style negotiations we are used to at COPs, can be part of the work of the Climate Convention over the two and a half years remaining until a new agreement will be finalised. It would certainly help to generate the ideas and build the trust needed for a successful outcome. It is a good sign when at the end of a long and busy day, negotiators can smile and say they had a good day and that their belief in the process is restored. Let’s hope we can maintain this mood and momentum in the coming months and years.

Our Work: Equity and Climate Justice