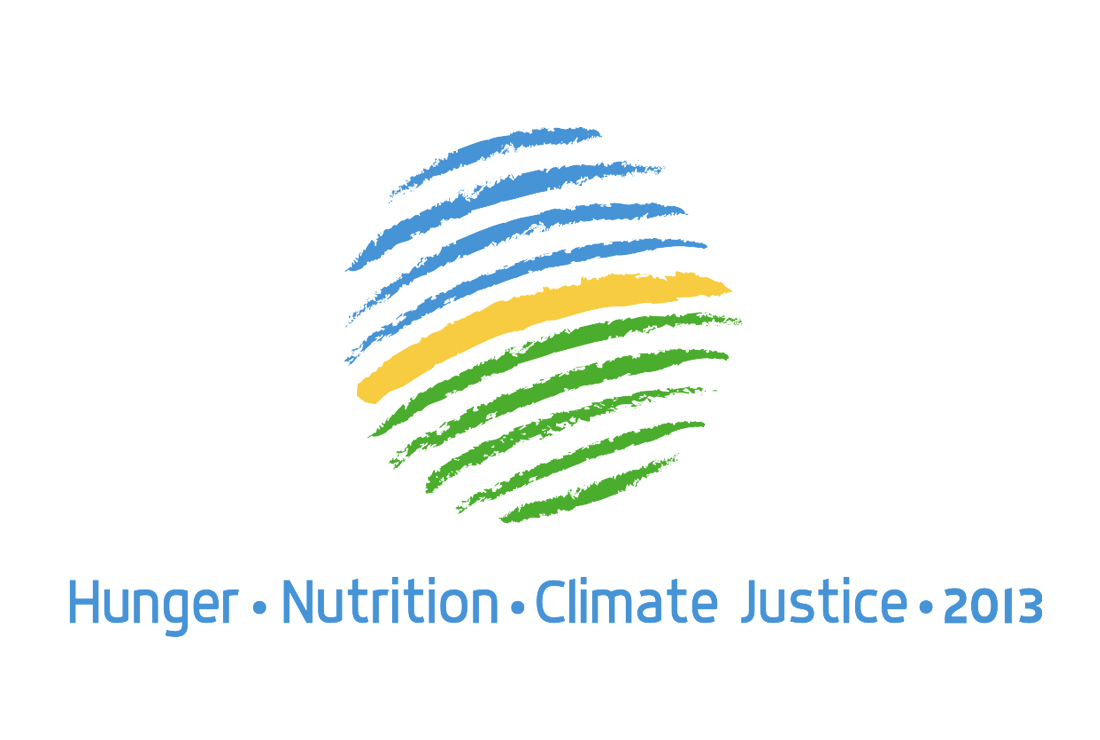 350 delegates, from 60 countries around the world came to Dublin for two days of lively talks, discussion and interaction, at the Foundation's Hunger - Nutrition - Climate Justice Conference.

Day one of the Hunger – Nutrition – Climate Justice Conference began with lively discussion, interaction, and attentive listening from its 350 delegates, which have come from 60 countries around the world.

The listening conference – co-hosted by the Mary Robinson Foundation – Climate Justice and the Irish Government, with partnership support from the World Food Programme and the CGIAR research programme on Climate Change and Food Security – is about getting members of vulnerable households in grassroots communities together with the global development policy makers who seek to help these people in the decisions they make.

While at the conference, these grassroots community members have an opportunity that rarely comes their way – the chance to have their voice heard, and tell their stories of how climate change is impacting on their food security, often leading to hunger and under nutrition.

“From the start we wanted this conference to be different,” Mary Robinson said in her opening address.
Download the full keynote speech delivered by Mary Robinson
“We have planned it as a listening conference where the emphasis is on hearing the experiences of those who grapple with the linked challenges of hunger, under nutrition and climate change on a daily basis, on small farms, in pastoralist communities, on small islands and in cities and towns around the world.

“We are not here to tell people what to do – we are here to learn about what needs to be done and how.

“Now, I admit that listening does not always come naturally to policy makers and political figures, so I am challenging all of us that fall into that category to really seize this opportunity to listen to the voices gathered here in Dublin.

“It is rare to have so many diverse experiences under one roof and we must make the most of this opportunity through a respectful and inclusive dialogue.”

By highlighting the links between hunger, nutrition and climate justice, through key international policy makers listening to those who are living with the impacts of climate change and are often the most vulnerable to hunger and under nutrition, the conference will take an important first step in enabling a respectful dialogue on the future of development.

The event, held in Dublin, Ireland, as part of the country’s presidency of the European Union, was opened by a speech by President of Ireland Michael D Higgins, where he said:

“Climate change is not an abstract phenomenon featuring in arcane science journals and measured only in laboratories. It is present everywhere and perhaps most harshly and adversely in environments where people are least equipped to meet its force and ill effects – and least responsible for its causes.

“We must recognise the particular vulnerability of smallholder farmers, pastoralists and fishing communities. Faced with shrinking productive resources, they are on the frontline of shocks and extreme weather events which are having a direct impact on their livelihoods and food and nutrition security.

“What is urgently required is a robust regulatory framework which protects our fragile and threatened environment and which respects the right of small landholders to remain on their land and retain access to water sources. Such regulation needs to be developed collaboratively and transparently involving practitioners from developing countries, such as those here today and which is respectful of, and responsive to, their lived experiences.”

Conference co-host, Ireland’s Deputy Prime Minister and Minister for Foreign Affairs Eamon Gilmore, spoke about the need for global political action to deal with the linked crisis of hunger, under-nutrition and climate change.

“We have gathered here, from many different backgrounds, for one simple reason: we depend on each other, and we need to act together. We know that more effective action is needed to end the enduring scandal of global hunger. Under-nourished children will never reach their full potential. Climate change is already having a devastating impact on those who are suffering most.

“What is involved here is a matter of rights, of justice and equity, but also of practicality. Even at a time of economic difficulty, we do have available to us the resources and the tools to put an end to hunger and empower poor communities. But to do so we have to mobilise our political will and moral courage.”

Also contributing to the opening addresses were Executive Director of the World Food Programme, Ertharin Cousin, EU Commissioner for Development Andris Piebalgs and Ambassador Patricia Espinosa, a member of the UN High-Level Panel on the Post-2015 Development Agenda, while a video message was delivered by President of Malawi Joyce Banda, who reaffirmed her commitment to climate justice in tackling food insecurity.

Ms. Cousin called on the voices of grassroots to be “listened to and acted upon” in the Post-2015 Development Agenda. “There can be no justice if people are allowed to go hungry or children malnourished…Women are the ultimate force multiplier in the fight against malnutrition. When women have food, children eat.”

She added: “In this room we have the means and the power to make a difference and shame on us if we don’t.” Ms Cousins remarked that people must be able to “participate in their own destiny,” adding that this conference gives participants the opportunity to discuss their stories while addressing the crisis of hunger, under-nutrition and climate change.

Commissioner Piebalgs: “We must now keep setting our sights higher. We have unique opportunity to move forward quickly towards a new and more ambitious post-2015 framework in which our commitment to combating hunger, malnutrition and under-nutrition are clearly stated – thanks in no small measure to the tireless work of Member States such as Ireland to bring food and nutrition security under the international spotlight.”

Ambassador Espinosa said the UN post-2015 development agenda will only be relevant if it is fully implemented. She described how, in order to address the needs of each country, there is a need to act at a national level, where the input of grassroots community members will be crucial – “I am convinced that, without the involvement of non-state actors, especially grassroots, the new development agenda will not work.” She added that the Post-2015 agenda will have to be people-centred, and focus on equity and justice.

Our Work: Food and Nutrition Security

Ireland and the Foundation take a lead role on Hunger, Nutrition and Climate Justice – 15 April 2013

Case Study: The right to food security in a changing Arctic – The 160,000 indigenous Inuit who live in four countries across the Arctic — Canada, Greenland, United States (Alaska) and Russia (Chukotka) have seen major changes in their food security over the past 60 years…

Case Study: Food security in the face of climate risks – Mongolia, with 2.87 million people living on 1.5 million hectares, is the world’s most sparsely populated country. With 15 animals for every person, 70 percent of the adult population work in animal husbandry…

Climate justice and hunger top agenda for Dublin summit – Famine, drought and food security will dominate the agenda of a climate change summit hosted by the Irish government. – The Guardian, 15 April 2013

Climate change: how a warming world is a threat to our food supplies – The Guardian, 15 April 2013