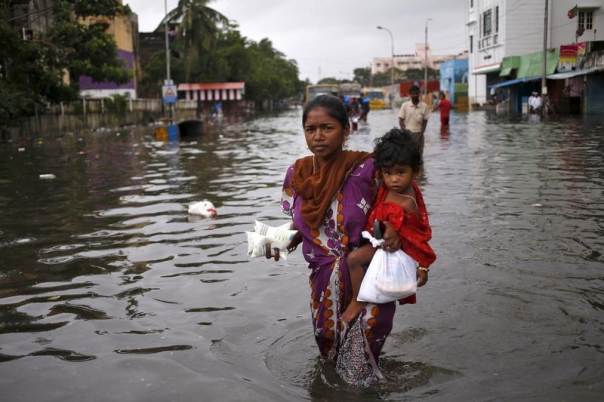 A woman carries her child and milk packets as she wades through a flooded street in Chennai, India, Dec. 5, 2015. (Photo: REUTERS/Anindito Mukherjee)

PARIS - Human rights and gender equality must be enshrined in the legally binding section of a new global climate change deal in order to secure climate justice for the poorest and most vulnerable, top human rights advocate and U.N. climate envoy Mary Robinson said.

There has been controversy over where references to human rights should sit in the agreement, expected in Paris this week. Some countries – including Norway and the United States – want it only in the non-binding introduction, experts say.

“We have to keep our eye on it; we have to keep making sure it’s understood that it’s not just words – it’s the values,” said Robinson, a former Irish president who runs her own foundation for climate justice.

Strong, binding language on respecting human rights is needed because “we’ve had a lot of mistakes – corn for ethanol that drove up food prices, and big dams that displaced people without proper land rights”, she said.

“We have had problems and we need hooks of values in the agreement that prevent bad climate policy, that promote good climate policy,” she told the Thomson Reuters Foundation in an interview on the sidelines of the Paris talks.

Speaking at the opening of the U.N. climate summit in Paris, world leaders – from the French to the Chilean presidents – made a strong link between the climate change deal and protecting those suffering the most from worsening extreme weather and rising seas, Robinson noted.

Norway, the United States and some other countries have insisted the climate deal should be a purely environmental agreement, and expressed concern that a binding commitment to human rights – currently proposed in the draft text – could open up a route to greater legal liabilities, experts say.

Robinson said putting human rights in the binding deal would not create new legal rights. Climate change-related lawsuits are happening anyway, from the Netherlands to Pakistan, she noted.

“May more rise, because the more we can have innovative litigation, the better,” she said.

Ashfaq Khalfan, law and policy programme director at Amnesty International, said on Monday that Norway, Saudi Arabia and the United States are “at risk of being labelled ‘human rights deniers’ in addressing climate change”.

“Norway is claiming to be a bridge builder on the issue of human rights, but rather seems intent on blowing up an essential bridge between environmental protection and human rights,” Khalfan said in a statement.

Saudi Arabia, which opposes the inclusion of human rights in a Paris deal, has suggested language on respect for “the right of peoples under occupation” – an oblique reference to the Palestinian territories – as a blocking tactic, observers say.

But Robinson said it should be possible to find a way around this, as has been done with other international agreements.

On a day focused on gender at the climate talks, Robinson called for language in different parts of the agreement – on key issues from finance to reducing emissions – that ensures women’s needs are met.

The policy arena in which efforts to curb climate change and adjust to a warming planet are happening “is not a very gender-responsive world – much less than the development world, and we have to keep struggling to ensure (gender equality) is fully understood,” she said.

There is still a long way to go in working towards gender balance among negotiators at the talks – an agreed goal – as the proportion of women delegates has not increased from around 36 percent a year ago, Robinson noted.

To achieve “climate justice” for the poorest, a deal in Paris will have to include financial support to help them adapt to climate change impacts, and a mechanism for dealing with the unavoidable loss and damage those impacts cause, she said.

The agreement should also include short- and long-term ways of ramping up emissions reductions that will allow the world to limit global warming to close to 1.5 degrees Celsius, as many developing countries want, she said.

“All that captures an agreement that is helping to recognise that climate is already impacting the poorest and most vulnerable, and that it is dangerous for the world, and dangerous for humanity,” Robinson said.

“We have to be on a pathway post-Paris that heads us in the right direction,” she added.

This article was first published on trust.org on 8 December 2015. Reporting by Megan Rowling; editing by Laurie Goering.