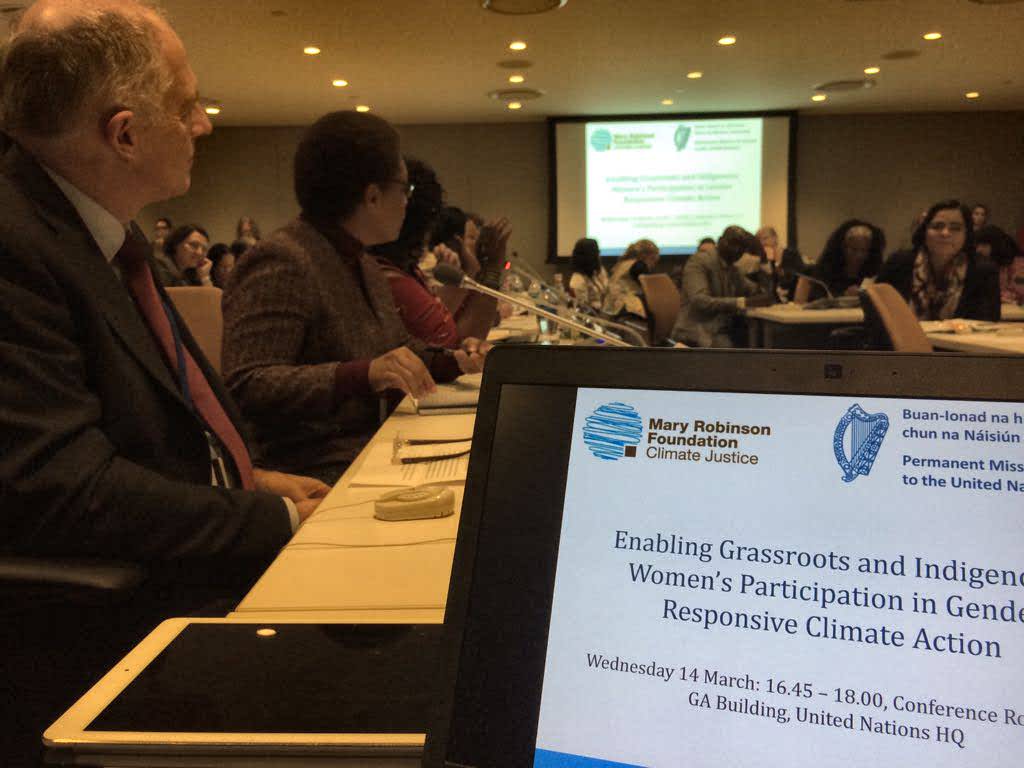 Increasing women’s participation in the design, planning and implementation of climate actions can lead to improved environmental and development outcomes for the everyone – women’s leadership and inclusion at all levels has led to improved outcomes of climate related projects and policies. The benefits of this participation are not just for women, the whole community benefits – it is not only the right thing to do, it is the smart thing to do. Women’s meaningful participation is essential for climate justice.

This was the focus of a climate justice dialogue, co-hosted by the Permanent Mission of Ireland to the United Nations and the Mary Robinson Foundation – Climate Justice, during the 62nd session of the Commission on the Status of Women (CSW) held in New York on Wednesday 14 March. The dialogue provided CSW delegates an opportunity to discuss the challenges and opportunities in relation to the participation of grassroots and indigenous women in climate action at national and international level. 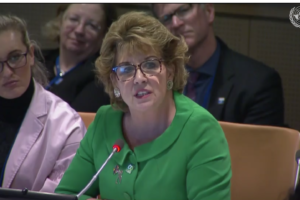 HE Ambassador Geraldine Byrne Nason, Permanent Representative of Ireland to the United Nations, New York and Chair of the Commission on the Status of Women, 2018

Chair of CSW, Ambassador Geraldine Byrne Nason co-chaired the dialogue with Mary Robinson. In setting the scene, Amb Byrne Nason highlighted women’s agency and acknowledged the vital role that women in rural communities play in climate action. The Ambassador also announced that the Government of Ireland had committed financial support to the UNFCCC for the work of the Gender Focal Point, demonstrating Ireland’s commitment to gender responsive climate action.  Explaining how the session was not typical of UN side events with a panel of experts she encouraged people to speak to their lived experience whether that be living on the front lines of climate change, or from a legislators perspective, or a policy makers perspective so that we could better understand what more is needed to enable the participation of grassroots and indigenous women in decision making.

Mary Robinson emphasised the participatory nature of the event when she said “We who are in positions of decision making power, or who engage in processes that will ultimately affect the lives, and decide the fate of whole swathes of the planets people cannot do so in isolation.  We have a moral imperative to ensure that there is no one ‘preferably unheard’.  It is easy here, in the United Nations, negotiating highly technical aspects of international development and climate policy, to feel that there is no place for local voices, for indigenous voices, for women’s voices.  But even as I say this we can hear the lie of it.  This is a place which needs more, not less input from the vulnerable, from the impacted and from those experiencing climate change first hand. “

Agnes Leina, an indigenous woman from Kenya was the first to speak from the floor and reminded the room of a basic principle of policy making when she said that there should be “nothing about us, without us.” “Climate action needs to hear our voices; so let us speak. Listen to us and learn from our knowledge and experience. An empowered woman is a powerful agent for change and a voice for her community.”

At the most recent Conference of Parties of the Climate Change Convention in Bonn we saw progress made on enabling grassroots and indigenous women’s participation in gender responsive climate action.  Fleur Newman, Programme Officer and Gender Focal Point with the UNFCCC explained how, under Fiji’s Presidency, we saw the adoption of the first Gender Action Plan, and highlighted the progress made on the establishment of the Local Communities and Indigenous Peoples’ Platform.  Explaining how more data and evidence on the differentiated impacts of climate change on women and men she encouraged stakeholders to makes submissions to the Gender Action Plan and stressed the need for the local and national experience to inform the international processes in order to ensure their relevance to people’s lives. 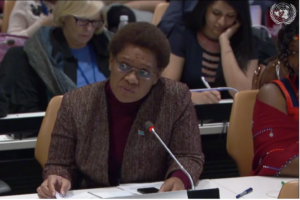 Minister Mereseini Vuniwaqa, Minister for Women, Children and Poverty Alleviation, Fiji explained how the Fijian COP Presidency also launched the Talanoa Dialogue, which, at its core, has the purpose of sharing stories, building trust and empathy.  Including grassroots and local voices in this process will be a key step to grounding this dialogue in human rights and making sure that it is people centred and hears people’s voices and she encouraged stakeholders to make submissions to the Talanoa stressing the fact that anyone could make a submission – you do not have to be a Party or be granted Observer status. 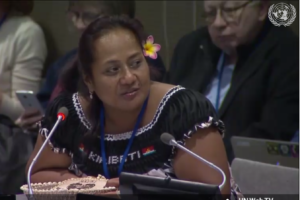 The importance of accessible language in enabling the participation of women, particularly grassroots women, was raised by Hadia Sheerazi a student from Columbia University and Girl Rising Ambassador when she called for development and climate policy documents to be translated into everyday language that was understandable to a non-practitioner. This point was underscored by Ann Kautu an indigenous woman and Principal Women’s Development Officer at the Ministry of Women, Youth, Sports and Social Affairs, Kiribati when she explained how there is a disconnect between what happens in the international policy arena and the the realities of the women who were building the resilience of their communities to the impacts of climate change using their local and traditional knowledge.

A video of the session is available to view here.

Commission on the Status of Women

Our Work on Women’s Leadership and Climate Change