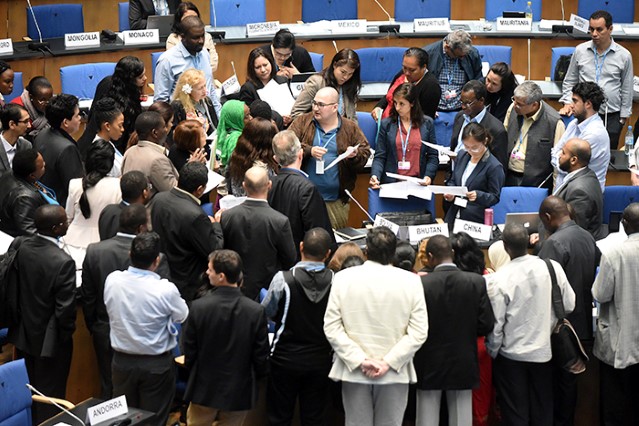 The most recent round of negotiations, held at the World Conference Centre in Bonn, Germany, concluded yesterday – now just 10 days of negotiations remain before the beginning of COP21 in Paris.

“I haven’t had a chance to sit in the canteen yet” the man queueing beside me says. It’s not today he’s referring to, he means he hasn’t sat down to eat since negotiations in Bonn commenced – this is day eight. We’re queueing for coffee at the World Conference Centre. It has been a busy morning, Mary has had a full programme of meetings and I need a shot of caffeine to keep up.

The delegate I’m chatting with is one half of a team of two, he and his colleague are representing a small South American country at the climate negotiations. The coffee counter stands in the middle of a bright, open foyer filled with the buzz of multi-lingual conversation. He is in a good mood in spite of his relentless schedule. Negotiations on REDD+ have just finished, he tells me, and the conclusions are positive. REDD+ is an initiative of the UNFCCC to incentivise the preservation and regeneration of forests. It is an agenda item of primary concern to his delegation because forests are important carbon sinks and at the same time provide livelihoods for his people, which makes it important for his country that a balance is struck between both. But he laments the lack of urgency in the negotiations to conclude a new climate agreement; sentiment I’ve heard expressed a number of times already this morning. The queue seems to be suffering from a similar lack of urgency and I take my leave, without a coffee, in order to make the next session.

I’ve delayed a little too long in conversation and I’m going to have to move quickly if I’m to have any hope of getting into the room where the negotiation session is taking place. In the corridors screens, like those you would find in an airport departure lounge, direct participants to where they need to be. I glance at the scrolling list to confirm I’m heading the right way – the World Conference Centre is big and I don’t have time to get it wrong. The screen is full of agenda items, the breadth of the negotiations taking place here in Bonn is striking.

At this June session, the main event is the negotiation of the new agreement – over eighty pages of text which negotiators are pouring over, line by line, in a tedious but necessary streamlining exercise. In an effort to speed up the process, these negotiations have been split out into two sessions on separate sections of the text. These sessions are running in parallel. But the agreement isn’t the only show in town. At any given time there can be up to three or four other agenda items being discussed around the scientific, technological or implementation issues central to combating climate change.

At this session in Bonn, for example, the delegation from the United States had 42 people compared to Vanuatu with a delegation of only two people. The number of meetings that are relevant to a country does not diminish because of the delegation size. It is well understood that if you want to have your concerns addressed, you have to be at the decision making table.

For countries that can afford to send an army of negotiators, this is not a problem. But for my friend from the coffee queue, it’s a different story. It means that his delegation can only participate in half of the sessions at any one time. The poorest countries are some of the most vulnerable to climate change and yet asymmetries in negotiation capacity can mean that their voice is absent from the decisions that are of great significance to their people, while those countries with a wealth of resources can follow all strands of negotiations seamlessly. It’s hardly surprising he doesn’t get time to relax in the canteen.

His day likely begins at 7am, with coordination meetings where groups of countries in similar circumstances discuss consolidated positions. Negotiations begin at 10am and, at this session, they have been running until 9pm. Then he likely spends some hours catching up on the outcomes of the sessions he was unable to attend, leaving little time for the more trivial issues like sleeping and eating.

To some extent, I can empathise. There are three of us here in Bonn from the Foundation, including Mary. The days pass as a blur of meetings – there is little time available to observe negotiation sessions. When I do manage to catch part of a negotiation session, it is only possible to get a glimpse of the bigger picture that is unfolding. So at night, back at the hotel, we spend time compiling notes on the sessions we missed and updating our colleagues back in Dublin of the day’s activities. But as busy as we are, we do manage to eat in the canteen because we are observers, not negotiators.  The climate change negotiators literally have the weight of the world on their shoulders and for some, because of their size, that is a very heavy burden.

One of the Principles of Climate Justice asks to “Ensure that Decisions on Climate Change are Participatory, Transparent and Accountable”. Find out more.

The Guardian: “Everything you need to know about the Paris climate summit and UN talks” (1 June 2015)

What is the UNFCCC Processs?

Our work on Equity and Climate Justice