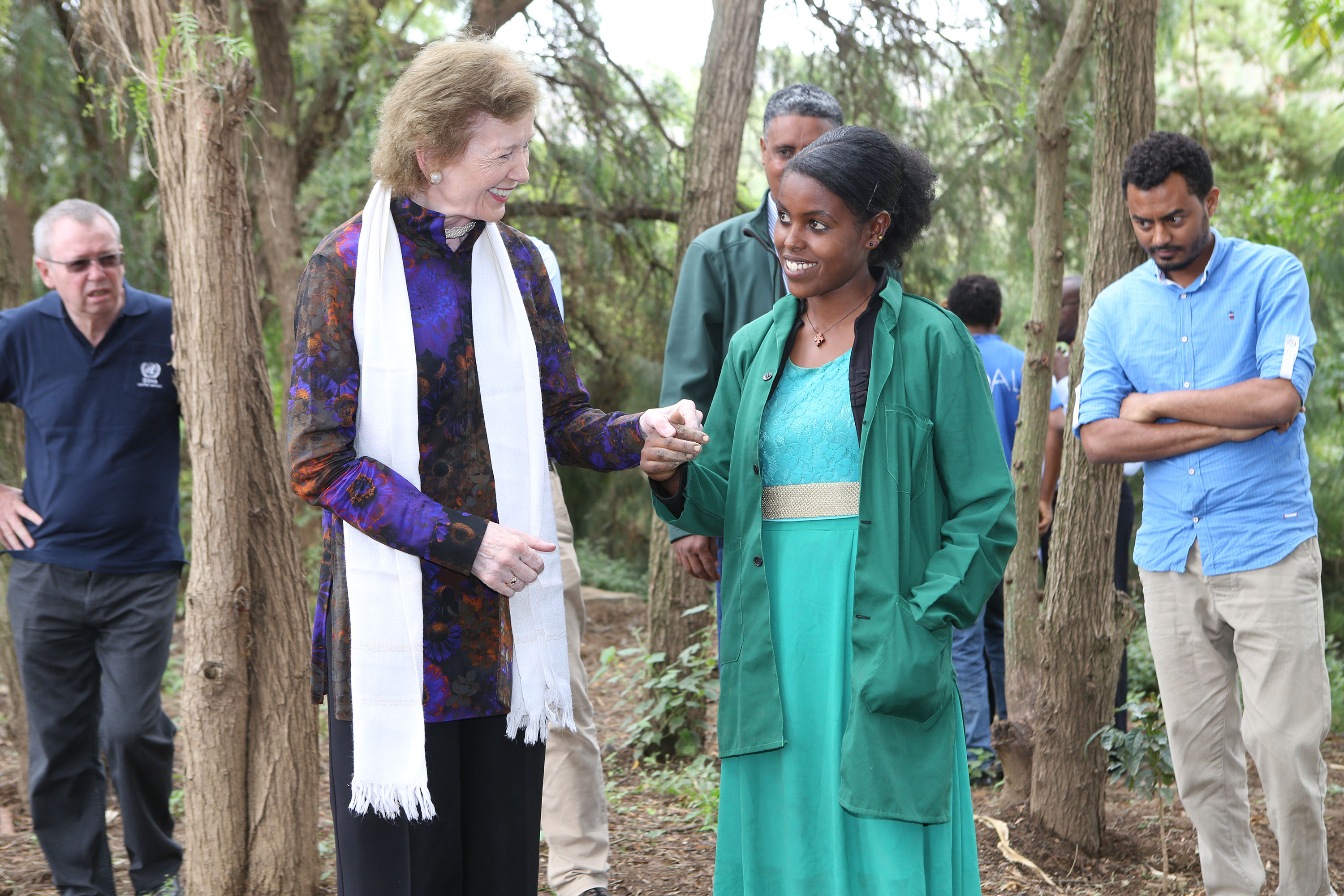 I met men, women and children who were hungry and malnourished on my recent trip to the drought stricken Tigray region of northern Ethiopia.  It was shocking as it always is to see mothers and fathers struggling to feed their children.  But it is not desperation or even my own dismay that shapes my memories; it is the resilience I saw in communities tested beyond human endurance that I remember and the capacity of the young people I met to dream of a better life – even in the face of such hardship. One of the people who epitomised this was Mebrihit Gitsadik, a 21 year old farmer I met in Gergera. She showed me around a tree nursery project made possible by the initiative of her community and Irish Aid to protect the valley from erosion and replenish the ground water reserves.

Mebrihit is living life and in charge of her own destiny, even in the face of adversity.  Likewise, Ethiopia is a proud nation with big dreams.  However realising those dreams is getting harder and harder in the face of climate change; a problem the people of Ethiopia have done little to cause, and which we in the industrialised countries of the world are responsible for. This is the great injustice of climate change – it affects the people least responsible the most.

The hardships facing people in Ethiopia barely make the news.  Yet they are a symptom of the inequality of our time.  Unlike a flood or a cyclone, the El Niño induced drought started last year and crept up on people through failed harvests; causing food reserves to be exhausted and malnutrition to grow.  The El Niño events, although natural and cyclical, are now aggravated by climate change and come on top of the challenges countries like Ethiopia already face due to rising temperatures and erratic growing season associated with climate change. This means that although Ethiopia is widely recognised as a leader in low carbon, climate resilient development, with a national plan to manage climate risk and reach middle income status and carbon neutrality by 2025, it can still be overwhelmed by a drought like this one.

Ethiopia is not waiting for handouts. It has already mobilised USD 800 million of its own funds to address the crisis and has put in place a whole range of measures to increase the resilience of its population to the now inevitable impacts of climate change. These measures were tested this year by the worst drought in decades and while they prevented people from dying they couldn’t protect the most vulnerable, particularly children, from under nutrition.  This is where the international community has to come in and react effectively in the short term while supporting Ethiopia’s longer term plans to develop sustainably and to prepare for future droughts and floods.

I was hearted to see the good spirit of cooperation amongst the Irish Aid agencies, Concern, Goal and Trócaire in Ethiopia.  Together with Irish Aid they are supporting the government and local communities to react to the short term humanitarian crisis while investing in the long term plans to eradicate poverty and increase opportunity.

In an increasingly fractured world, the impacts of climate change hammer home the fact that we are interconnected.  No country alone can protect their citizens from the impacts of climate change, it is something that requires absolute solidarity as human beings sharing this planet.  What Ethiopia and countries like it need is not just our support in a time of crisis – they also need us to change our mode of development and end our reliance on fossil fuels.  And let’s be clear – we need them too.  The only way to avoid dangerous levels of greenhouse gases building up in our atmosphere is to enable every country in the world to participate in the transition to low carbon development.  After all, Ethiopia must and will develop and it is in all of our interests for this development to be without fossil fuels so that future generations can inherit a safe and fair world.

Europe takes pride in being a leader on climate change – and now, even as the European project is tested – it must be steadfast in its determination to stay at the forefront of climate action.  Europe must lead in implementing the Paris Agreement adopted last year and connect its commitments to climate action to those on disaster risk reduction and humanitarian response.  One of my key messages as Special Envoy of the UN Secretary General on El Niño and Climate is the need for the UN and governments to better integrate policy making on sustainable development, humanitarian response and climate change.  At the household level, hunger whether experienced due to poverty or climate change, means suffering and a loss of dignity.  Only by addressing the interlinked causes of food and nutrition insecurity, and responding for both the short and long term, can policy makers effectively protect people’s rights.

In the short term the international community has to mobilise the USD 518 million needed to meet the funding gap to assist El Niño affected communities in Ethiopia.  In the longer term we need to change the way we do things and embrace the ‘can do’ attitude of the people of Ethiopia.  Some might say it is impossible for Ethiopia to reach middle income status in less than 10 years and to do so without fossil fuels.  But I say they can and it is in all of our best interests to help them to do so while adopting the same attitude to change at home.  We too can aim for development without emissions – and then we can be proud of the leadership we give at home as well as overseas.