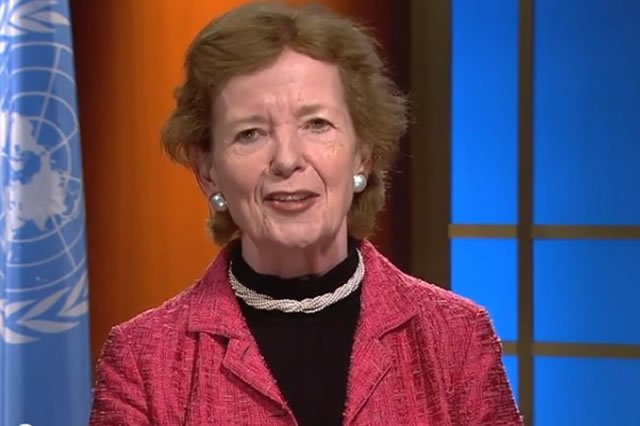 While developed countries are the main contributors to the world’s climate change, poorer nations also bear the burden of making changes in energy use. PBS's Jeffrey Brown sits down with Mary Robinson to discuss global goals.

JEFFREY BROWN: Earlier this afternoon, I talked about the summit and the challenges with Mary Robinson. She’s the former president of Ireland, now serving as the U.N. secretary-general’s special envoy on climate change.

Mary Robinson, thank you for joining us.

This is not a summit intended to result in a specific new agreement, correct? So what is the purpose of this gathering?

MARY ROBINSON, UN Special Envoy for Climate Change: The main purpose was to bring climate action up to heads of state.

We need leadership and ambition in order to get a climate agreement in Paris in 2015, in December 2015. And the secretary-general recognized that we needed to have a strong leadership and mobilization. And this is what the climate summit has really done, I think in an extraordinary way.

First of all, we had the climate march, with more people going out into the street, not just in New York, but all around the world. And then heads of state have come in bigger numbers than ever before, more than 120. There were only 94 in Copenhagen a few years ago, and we’re much better prepared now.

And the announcements that have been made and are being made on a whole range of issues, on climate smart agriculture, green bonds, forestry, cities coming together, energy efficiency, support for Africa, support for small island states, are really mobilizing people to believe this is a moment where we are changing direction in favor of a renewable energy world that would be better for everyone.

JEFFREY BROWN: And yet the old rift between developed and developing countries over who should bear the burden of changes in energy use hasn’t been resolved. Is there specific movement that you see that could clear the way to a meaningful agreement?

MARY ROBINSON: I think we have made progress on that.

The Durban conference came out with the Durban enhanced platform and said all countries must take action on climate change. And, of course, the bigger emitters and the countries that benefited for longer from fossil fuel growth, like the industrialized countries, they must move further and they should move first.

But there’s less of a divide, I believe. I sat in on a meeting of an alliance of the more progressive states who got the Durban agreement together, and the mood was actually quite positive. But the poorer countries and the small island states are saying, we want some more evidence of financing to help us adapt.

JEFFREY BROWN: Speaking of the biggest emitters, the heads of state of two of the top three, China and India, are rather pointedly not attending the summit. Does that suggest an unwillingness to move toward any kind of new agreement?

MARY ROBINSON: My understanding is, it’s not actually very pointed.

China believes that — a very senior representative is coming, the vice premier, the third in the Chinese establishment and the first on climate and development issues. So, they regard that as being very senior. And in the case of Prime Minister Modi, he’s coming to the General Assembly, and I’m sure he will reference climate later. But he has a state visit to the United States at the end of the week, and he couldn’t with away from his country for all of that time.

And both — the communications from both have been, we do want a climate agreement, we’re very serious about it.

So I don’t take it as being negative in that sense. We’re incredibly moved by the numbers that are here and the numbers that have come out in the street to mobilize their leaders. I think the secretary-general played it absolutely right in having this climate summit. It has made a huge difference to everybody’s deadlines and planning. And it has helped us on the road, first of all, to Peru to, Lima, this December, where we see a text of a climate agreement and then negotiations for the year that will take us up to Paris.

JEFFREY BROWN: Among industrial countries, as you say, there have been pledges for more action and pledges for new money, and yet even here in the U.S., there is little sign of a political consensus on the size of the problem or the policies needed.

MARY ROBINSON: And yet I was just talking to Jerry Brown, the governor of California, here in New York, and hearing from him the steps that California has taken.

So cities are moving and states are moving within the United States. And I think people, especially young people, really do get how important it is that the United States gives the leadership on this, because it’s going to be good for their economies. There was a new economy — a new climate economy report saying that all countries should now take climate action because it’s good for future sustainability. Get out of fossil fuels as rapidly as possible and into renewables.

I believe, coming from a climate justice perspective, we have to do that fairly. We have to realize that even large emerging economies have very large poor populations, and poor countries don’t have good energy at the moment and are worried about trying to move so rapidly into renewables, and need to have some space to work it out, but need our help to do it as rapidly as possible.

JEFFREY BROWN: Finally, you said going in that this gathering shouldn’t repeat the mistakes of Copenhagen. How do you define that, and how exactly will you measure success from this gathering?

MARY ROBINSON: We have learned the lessons from Copenhagen. It was astonishing that heads of state would go to Copenhagen without knowing what the outcome would be. And then they cobbled together the Copenhagen accords.

We have time to prepare, and the preparation is much more rigorous. There will be a draft next in Lima. There will be a year for negotiation. It has to be inclusive because it’s the U.N. system. But everybody has to be prepared to step up to the plate.

And leaders now are talking very seriously about how climate is already affecting their countries. So they need this climate agreement. And we need a pathway that keeps us below 2 degrees Celsius. I don’t say I’m an optimist, but I borrow what Archbishop Desmond Tutu says. I’m a prisoner of hope. I’m very hopeful that we’re on the right course at last, that we’re mobilized at last.

I want civil society everywhere, in this country and all over the world to, keep up the pressure on the leaders, because we need to change course, and we are changing course, to get a safe world for our children and grandchildren. It’s as important as that.

JEFFREY BROWN: Mary Robinson is former president of Ireland and now U.N. special envoy on climate change. Thank you so much for joining us.